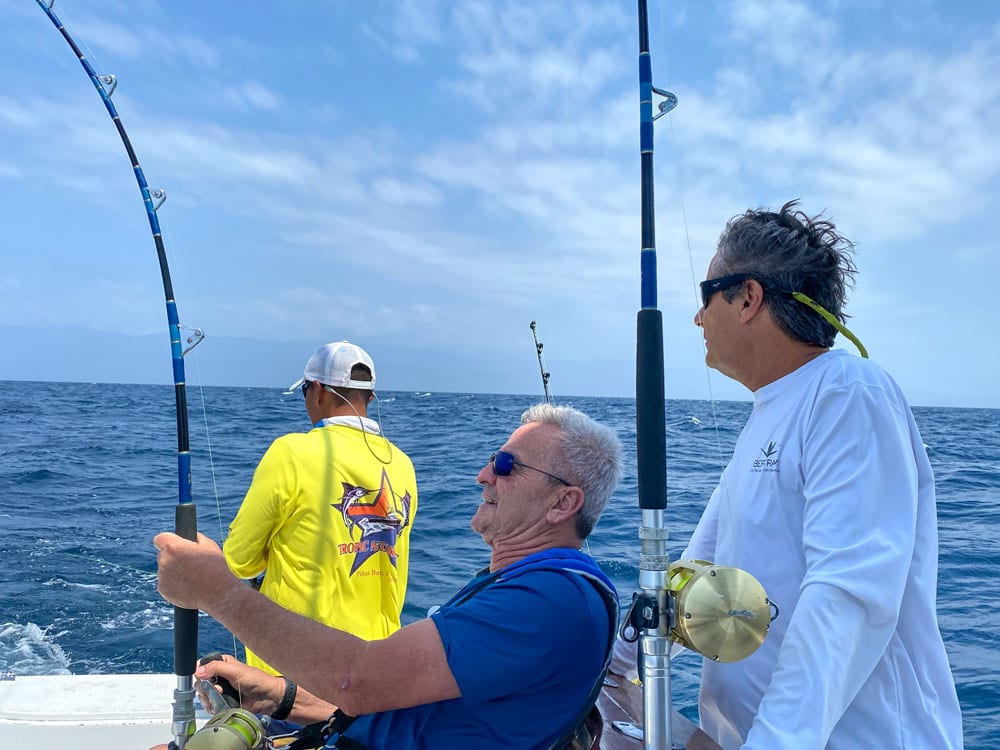 The Marlin are beginning to return with fish in the 350-4001b range the average. Inshore we are seeing roosterfish still tearing up baits along with the odd Tarpon, Cubera Snapper and Bluefin trevally.

The rains have started and with them so have the current lines offshore. The Humboldt Current is brining beautiful nutrient rich waters from the south along with loads of floating debris which provides the perfect conditions for the smaller bait fish. We are seeing loads of Dorado under the trash lines and smaller sharks enjoying the easier prey that these conditions provide. The seas have generally been calm with some larger ground swell and not more than 2-3ft on choppy days. The cloud cover during June is always great as it makes the days cooler.

John Elms Jr. brought his son John Ill for a father son trip that they will always remember. They are both avid anglers and love being on the water. They got to fish with Capt. Candela on Miss Australia and knocked quite a few species off their bucket list. Both John’s got to release their first Pacific Sailfish while his Dad released his first ever Roosterfish of 55 lb. We had a great time with the guys and can’t wait to see them back down at TSL for more fun on the water.

Mike Marcus brought his daughter Sydney for an adventure in the jungles of Panama. Sydney was in her element in the jungle enjoying the birds, and all the creatures that one can see from the Jesus lizards that run across the streams to the giant moths and rhino beetles. The father, daughter duo fished with Capt. Lorenzo on Miss Canada. Sydney got to catch loads of yellowfin Tuna, Sailfish and a beautiful 40 lb. Roosterfish, her first.

Thiego Felzen who has fished at Tropic Star Lodge before joined us with some friends. The group came up from Brazil. Thiego was here earlier in the year to do some jigging and popping seminars with our captains and mates and to see the fishery for the Brazilian market. He had such a good time with us that he joined us again to do a small shoot with some friends of his and we can’t wait to see the results. They got some great fish jigging on the reef and inshore on the poppers. Offshore the guys got to release Sailfish, but we could never get them to leave the yellowfin Tuna which were hitting surface lures offshore.

Mark Davis of BiigWater Adventures was down in the beginning of June to film another exciting episode. He fished for three days on Miss Island Star with Capt. Gavilan. I was fortunate enough to fish with him and it was an absolute blast. We got to set some satellite tags on Sailfish, chased down yellowfin Tuna on surface lures and got stuck into heaps of  Dorado by throwing lures at the floating debris that we find this time of year offshore.

Brothers, Mark and Gary Rose from Texas have been coming to Tropic Star Lodge for many years and this was their 18th trip down. They were joined with by their wives Peggy and Eda and another four couples mostly from Texas. What a great and fun group of anglers. During their stay the group released over 120 Sailfish and more than 70 Roosterfish. They had great fishing inshore and off with loads of Yellowfin tuna making its way back to the kitchen along with Mahi Mahi to make fresh fish fingers and sushi. The group had Patterson set up a family style table each night where many great stories and jokes were shared.

The start of the Sailfish season is here, the dorado have also arrived and the tuna never left. We are enjoying hosting the  junior anglers at the lodge enjoying the sport and camaraderie of fishing. Seeing the next generation of anglers getting so excited for first time catches and learning things from the sea and about the jungle is so rewarding. We are really looking forward to a great summer here in the Darien and can’t wait for even more junior anglers to come down and share such incredible memories with their families and friends.

Sailfish season is underway– the dorado have also arrived and the tuna never left. We are enjoying all the junior anglers visiting the Lodge to enjoy the sport and camaraderie of fishing. Seeing the next generation of anglers excited for first time catches and learning lessons from the sea and experiencing our jungle adventures is so rewarding. We are really looking forward to a great summer here in the Darien and can’t wait for even more junior anglers to come down and share such incredible memories with their families and friends.