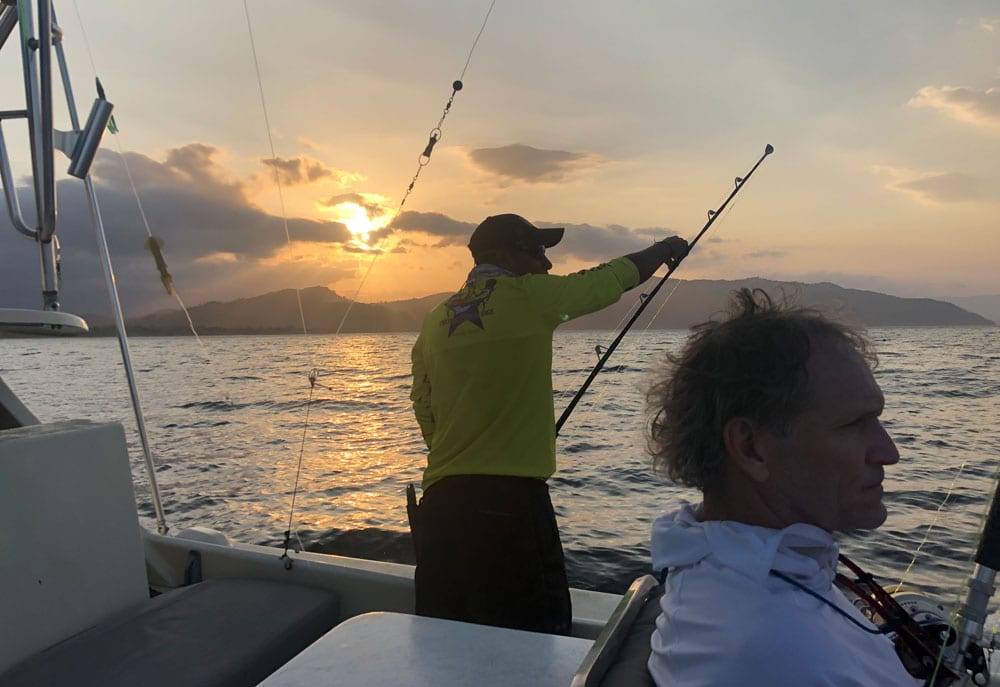 Inshore, the bite has been fantastic with multiple species of Snapper, Roosterfish and Grouper caught along with the odd Tarpon, spitting lures even higher than they jump themselves. Shoals of baitfish have been smashed by bigger predators along the rocks and for some lucky anglers they have been fortunate enough to see the water turn red and white with Snapper boils.

The water temperature has stayed cooler around the 74 degree mark on average. We have found some warmer water offshore but cooler water inshore. The water has been murky with little to no chop as we have had only gentle breezes switching from south to north. We are officially in the heart of our dry season. The rainforest has changed colors with many of the trees losing their leaves and others flowering changing colors to purple, white or yellow.

Charles and Brenda Buehler were joined by their son, Eric, and Daughter in-law, Greta. Charles and Brenda have been coming to Tropic Star Lodge for many years and it was great to have them back with their family. They stayed in one of the newly renovated villas and fished with Captain Gavilan on the recently refurbished Miss Island Star. Between the family they have collectively caught pretty much everything our waters produce here at Tropic Star. On this trip, they enjoyed some fun inshore and chased billfish offshore. While chasing the Sails, they encountered a Swordfish on the surface. Brenda released the 250 lb Broadbill for her first one. Absolutely the fish of the week! The family also released multiple Sailfish and had loads of fun with tuna and found some of the last Dorado of the season. Greta also releaser her first billfish, a Sailfish of 105 lb.

Richard Lewis and his grandfather, Joel Nolman, came for a fishing adventure. Both men are avid anglers and love being out on the water. it was wonderful getting to spend time with them swapping fishing tales. The guys were brave enough to try some deep dropping with great results. They brought home some Grouper for everyone and we enjoyed beer batter Grouper and french fries on a long family style table. The gents also released a massive Cubera Snapper and a Marlin. On one of the days, Richard also snapped a few excellent shots of a giant Whale Shark up close next to the boat.

Randy and Maddy Sook came down to the Lodge to escape the cold weather back home in Minnesota for some father-daughter time on the water. The Sook family visited us before and it was great getting to see Maddy and her dad back with us as both love fishing and the outdoors. They told us stories about the ice fishing they do back home. It’s on my bucket list to try it one day. While with us on this trip, Randy and Maddy had loads of fun fishing inshore where they managed to really rack up their species count. On one day they managed to catch 15 African Pompano along with Roosterfish and other species. Randy, unfortunately, got a little beaten up by some big mean Cubera Snapper, but he will be coming back for revenge next time. Offshore, they also released Sailfish and had their hands full with Yellowfin Tuna on spinning gear.

Walter Floyd and his son, Lucas, fished with Captain Walter and had some great father and son time on the water. The guys released loads of Sailfish really showing the rest of the fleet how it should be done. The father son team also experienced good tuna fishing with a couple caught around the 100 lb mark. The crew on Darien found some feeding Yellowfin on the surface that were just way too enticing to pass up. Needless to say, it was a decent work out after that.

Guests sharing fishing stories with family, friends and fellow anglers is what really makes this little piece of paradise so special. We look forward to seeing what the next few weeks bring and share in the fishing adventures of our visiting anglers.