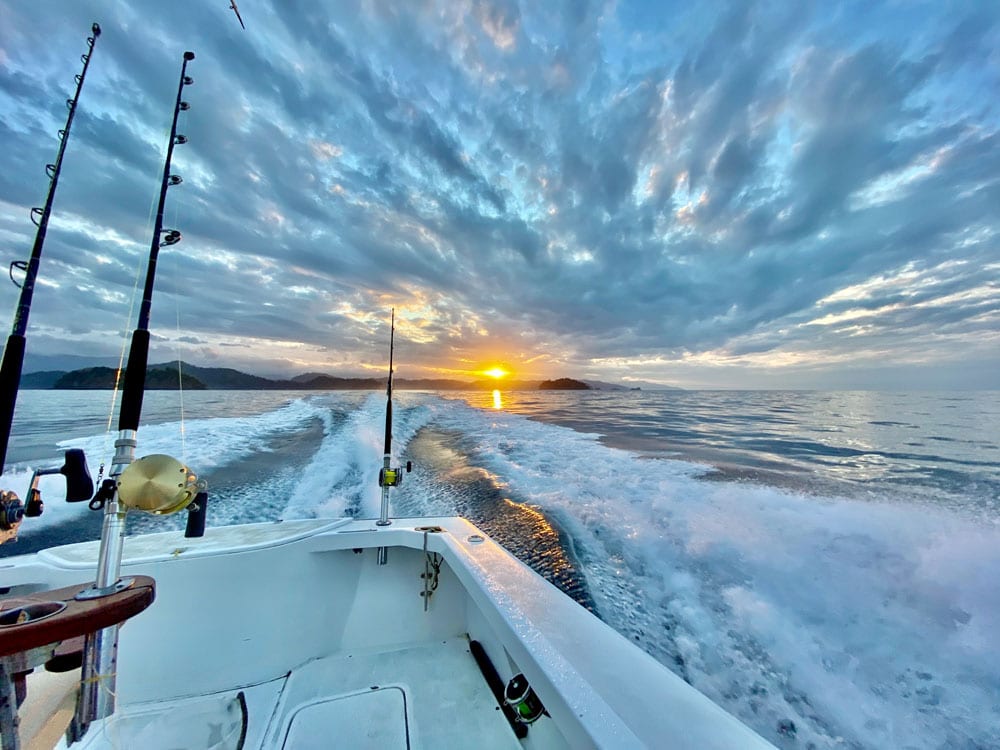 The Yellowfin began to feed in frenzies and there was some good-sized tuna brought back to the dock. With the Black Marlin being so much closer in than the Blues, it meant a shorter run for the fleet.

The weather over the past week was inconsistent with some big winds coming up from the south and even a bit of rain which is not normal weather for summer in Panama. With the winds changing constantly and blowing strong on two of the days, the seas were choppy. The water temperature was steady in the mid-’80s. It was bumpy sea conditions but the fish were biting!

Michael and Sheila Bonsignore love fishing and visit us each year at the same time. It was around 20 years ago that they met their good friend, Mark Mahaffey, during their first visit to Tropic Star Lodge. Now, they visit us together annually.  Each year they host a small friendly tournament. Michael is the Sicilian muscle to make sure all entries are in. The guests love the tournament and it really brings anglers together. Michael and Sheila had some great fishing on Miss Scandia with Capt. Jose. They released Black and Blue Marlin, Sailfish and wrestled more than a few IGFA Trophy-sized Dorado going well over the 50 lb mark or 130 cm on the official IGFA measuring tape.

Mark Mahaffey and his son, Tom, return each year and host a fun cocktail party for all our guests in the original owner’s house overlooking the bay. This year they also brought long-time friend and fellow angler, Richard Earle, whose last trip to the Lodge was 20 years ago. Peter Lambie, Carl Lambrecht, and Don Howe also came along to join in on the fun.  The group fished on board, Miss Australia and Miss Hawaii. Peter released his first Black Marlin of 300 lb and first Pacific Sailfish of 100 lb. Don was fortunate enough to release his first Black Marlin of 400 lb. Miss Hawaii won first place in the annual Mahaffey-Bonsignore tournament. Tournament winnings were donated to the village where we invested the money in a new computer and projector for a new and exciting school project we are working on with the village. A special thank you to all the tournament participants.

Jens Mayer, Ed Novinski, Dewayne Ullsperger, Shaul Kuper, Dan Carrier, and Colin Rothery met at Tropic Star Lodge for quality time fishing together. The fun didn’t end on the water, back at the Lodge the guys exchanged laughs and tales over wine. A few of the guys that have been here before brought some new friends to join our ever-expanding family. Ed and Dan had actually met at the Lodge on the previous trip and decided to get the group together. Jens on Miss Canada had his perfect day out smashing Dorado on his ten weight fly rod. Shaul released his first Black Marlin of 400 lb. Dewayne released his first Pacific Sailfish of 125 lb.  In addition to billfish, the group caught over 50 Dorado.

Over the course of the week, friendships were made stronger and new ones forged in the time-honored tradition of fishing. Spending time with friends or family out on a boat is always amazing as you have no otherworldly distractions and able to spend special quality time together. In this crazy world, these moments are few and far between. It is great for me to see our guests relaxing, enjoying time with loved ones and seeing big smiles as big as their fish.

Book now for March – September 2022, and you will receive 10% off as part of our Early bird offer!