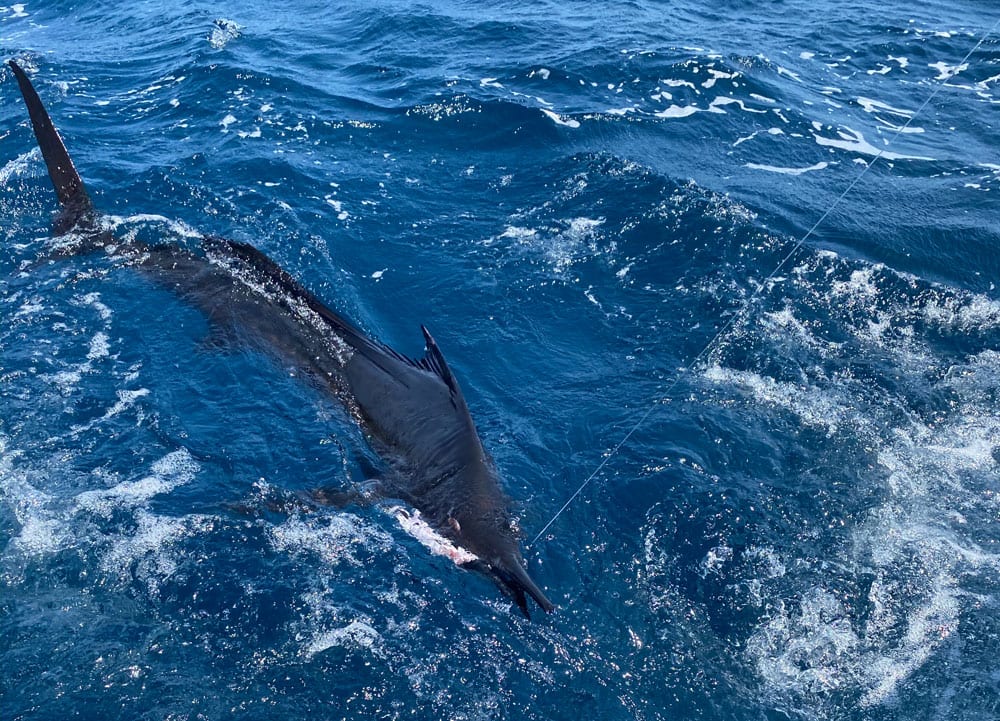 Release of the Black Marlin

Yellowfin Tuna have started to outnumber the amount of Dorado caught, which always makes anglers excited for fresh sashimi on the water. Some of the anglers also got to pit themselves against some of the larger Tuna which is always an exhilarating contest.

The skies were bright blue and the winds were far gentler this week. The water temperature is still hanging around the mid 80’s which is great for Billfish. We had a little off-color water move in for a few days but that doesn’t affect the Black Marlin like is does for Blue Marlin. The sea state was generally calm and anglers could sight fish from quite a distance.

Christian Weissenberg and Andrea Avalos from Guatemala came to Tropic Star Lodge for their first time. Their goal was to release a Black Marlin. And they accomplished just that and then multiple times overfishing with Captain Jose on Miss Scandia. Right off the bat on their first day out, Christian released his first Black Marlin, a beautiful fish of 500 lb and Andrea released her first Pacific Sailfish of 90 lb. Each day the couple was excited to return back to the Lodge and see the daily scoreboard. They had a couple extremely special days fishing, and on one of those days released three Black Marlin and a Sailfish.

Father and son, Michael and Corey Gustavus, are avid anglers who share a pure love for fishing. We enjoy having them at the Lodge. While fishing with Captain Vicente on Miss South Africa the guys racked up some incredible Marlin. They nearly missed a personal Grand Slam twice due to the Sailfish attacking baits lazily.

Ed Cady and Jack Heflin fished with Captain Jacob on Miss Tropic Star and what a week they had! Ed and Jack have fished many times together and this week will be one that they remember for many years to come.  The Guys both released multiple Black Marlin as well as Pacific Sailfish.

John and Pat from Canada joined us this November to fish in the season-opening Billfish tournament. The gents fished with Captain Candelo on Miss Australia. The Marlin bite was a little tough for them but they still managed to release a Black and a Blue Marlin. What they missed with Marlin releases was made up of some great Dorado and Yellowfin action. The guys are always a good laugh at the pool and dinner telling tales of fishing adventures they have had.

We feel fortunate to welcome the Rathbun family to our Tropic Star family. Chris and Tracie came with their sons, Jarrod and Wyatt. The entire family is comprised of avid anglers. They fished with Captain Luis and Mate Ermel. Chris normally captains his own boat and has been part of many Marlin releases but has never had his chance on the rod. All that changed this week as he released his first Pacific Blue Marlin of 350 lb. Jarrod released his first Black Marlin of 380 lb and both of them walked the plank to cheers from fellow anglers. Wyatt really wanted to take on a big Yellowfin Tuna and he got his wish when he won the battle against a 236 lb Yellowfin.

The fishing was really great for most of our anglers although some boats had a tough bite. The laughter and fun that was had by all was contagious. We do a village tour to the local village of Pinas and it was an absolute riot with our friends from the Canary Islands who are always up for fun. I know you are going to love the photos from this week.  As the season continues the Blacks will become more frequent and we can’t wait to share some more stories with everyone.