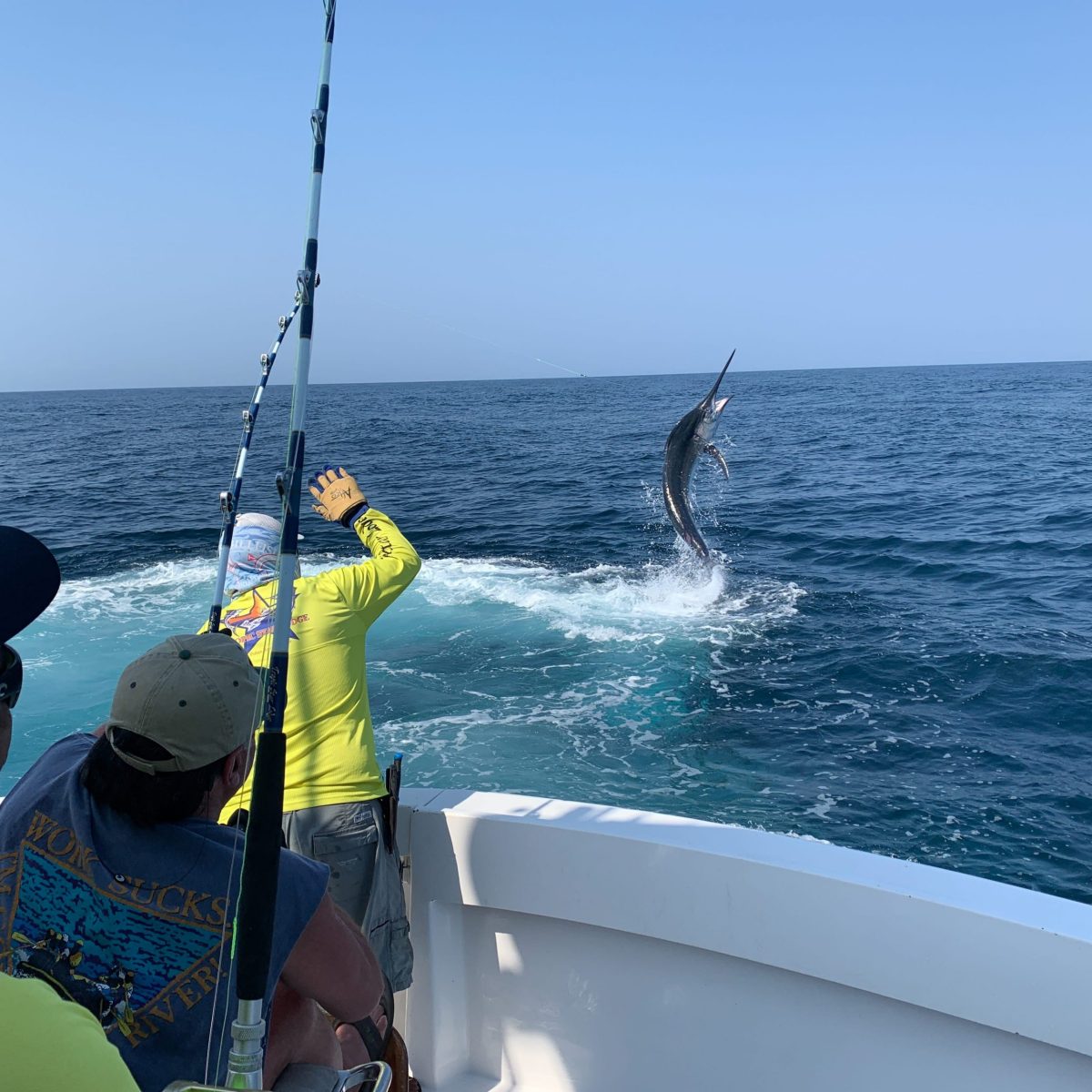 The Black Marlin action continued into March as we saw loads of Black Marlin on the surface daily as well as the odd Blue Marlin. Boats at times saw more than ten fish in a single day, however, the Black Marlin were just teasing anglers as they were doing nothing more than just sunning themselves. The Yellowfin Tuna came through in giant shoals moving quickly in unison with the Porpoise. The inshore bite exploded bringing with the plethora of inshore species our waters offer.
The currents and winds changed constantly during the first half of March making it tough to predict the bite. We had some cooler water up in the north and then warmer water down south. Each area offered a different fishing experience. The skies were bright blue and the seas beautifully calm almost every day.

Ron and Britt Vergnolle brought their son, Finch, to Tropic Star for his 15th Birthday. Ron and Finch are avid outdoorsmen and love hunting and fishing. Finch is a fishing machine and I loved his enthusiasm and knowledge. It was great spending time with him and the family. Finch also had Neptune’s birthday blessing as he released his first Pacific Sailfish and a beautiful 60 lb Roosterfish on a popper. Ron released a Cubera Snapper on popper which is one of the most exciting experiences as an angler. To top it all off, Finch released his first Black Marlin!
March guests Mark and Chuck Madary fished with Capt. Azael on the Miss Spain. The guys loved the inshore fishing and absolutely slammed it. It is always great hearing anglers complain about tired arms! The first day they caught too many fish to count. The second day the gents conducted a species challenge and caught over 10 different species trolling and casting along the shoreline. Their quote “The best fishing they have ever had”.

Jodi Leonetti brought her four sons fishing down at Tropic Star Lodge in March. Getting to meet the Leonetti boys and mom was a lot of fun, the guys are very passionate about fishing and we are hoping to have Jeffrey back to intern with us in the future! The family fished on Pollyanna with Capt. Fidel. Keshmen, our professional videographer, went out with them to record the action. The boys loved casting along the rocks. There were quite a few top water action shots from Snappers and Roosters. They also released their fair share of Roosterfish along with a bunch of Jacks and Mackerel while popping. Offshore they got into some awesome Yellowfin Tuna action and released a beauty of a Pacific Sailfish.

Wes and Tara Masters along with Ryan and Janie Bloom joined us from Alaska. They were quickly known to all as team Alaska and they did the name proud. Both couples love fishing and the outdoors and what a trip they had fishing abaord Miss Hawaii with Capt. Gustavo. They released a total of six Black Marlin. Four Marlin were released in a single day, all over 300 lb. Janie released her first Black Marlin of 400 lb and Tara released one of 350 lb. Team Alaska has already booked for February next year and we can’t wait to see them back.

We had a large group of friends and members of the International Light Tackle Tournament Association meet at Tropic Star Lodge. It was an awesome crowd with many of the anglers coming from Central America. All the anglers have plenty of experience when it comes to catching billfish. There was one angler from North America that the group lovingly referred to as “Gringo Bill”. Bill released multiple Black Marlin in a single day in addition to releasing a monster Roosterfish. Many of the anglers were chasing their Royal Slam which is all nine billfish from around the world. On this particular trip, Gustavo Merck got to complete his by releasing his first Black Marlin, an incredible and memorable lifetime achievement. Many rums where shared over the many Black Marlin releases that the group achieved.

Steve Demboske and Kaite McCray love fishing together. Their first day out on the water, they targeted Black Marlin without luck. Raising one and a few Sailfish with Capt. Adolfo. The next day, changing things up, they went inshore. They loved the diversity of species and being involved in the action by casting into the rocks. They caught mountains of Jacks and Mackerel and also brought home African Pompano, Yellowfin, and Dorado for dinner. Highlights from the day included releasing a nice-sized Cubera Snapper and Roosterfish. The lovely couple are engaged and we’re thinking about having their wedding at Tropic Star Lodge! We can’t wait to see them back again.
The fishing was solid during the month of March with a great Black Marlin bite and more Tuna than anyone could ask for. Currently we are keeping the wheels turning down at the Lodge making sure the boats are clean and serviced, the tackle is all ready to go for when the world returns to normal. Our amazing team is doing great. Please keep safe everyone and we can’t wait to see you in the near future for some amazing fishing adventures.

Plus, if you book within 2 weeks of your travel time, you will receive 20% off of your trip in our Last Minute booking deal.