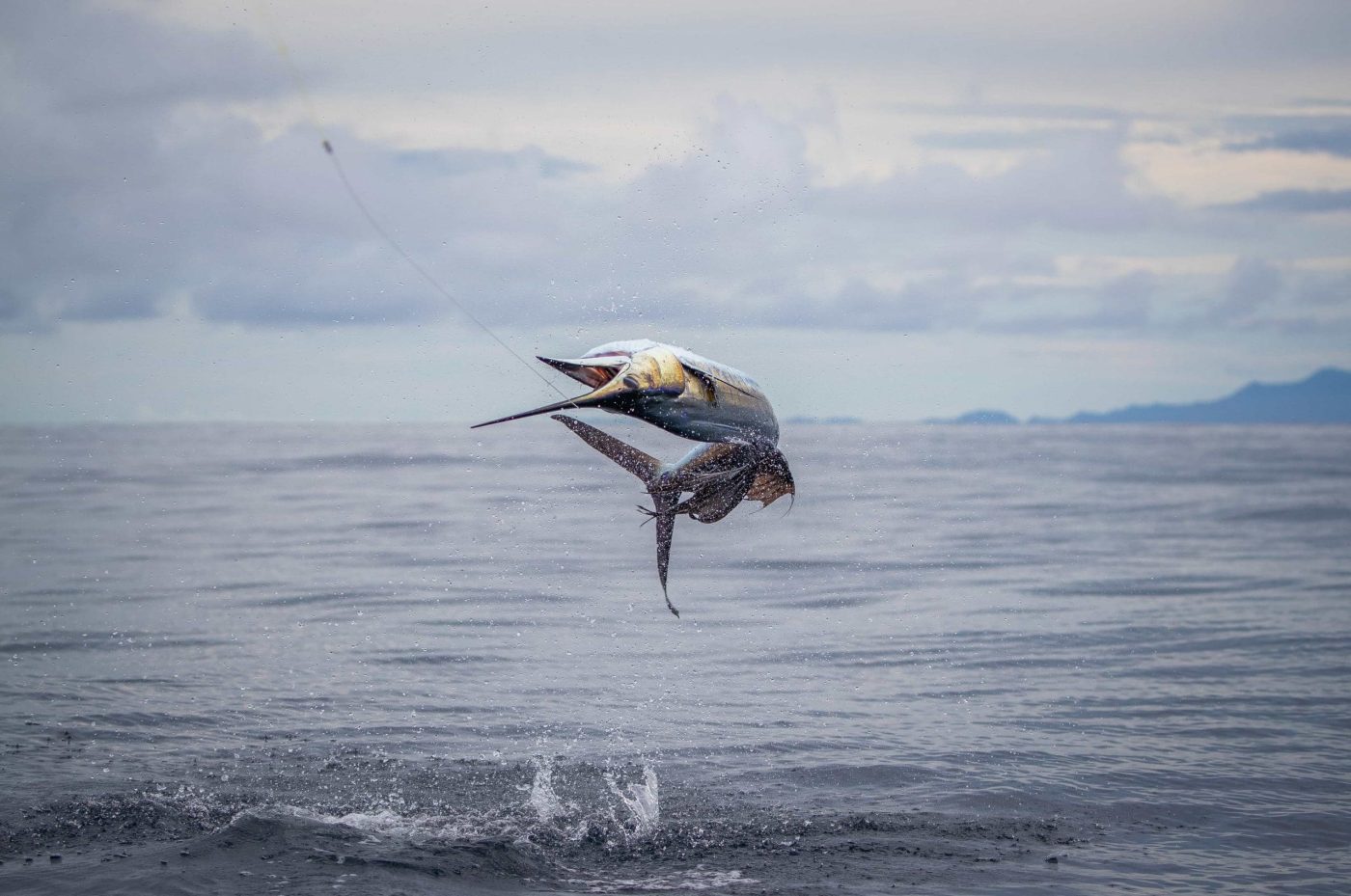 The Marlin bite was a roller coaster throughout August, with the bite peaking at exceptional before slowing down for two to three days. After the lull, it fired right back up again. The Blues offshore were feeding on large schools of Bonito, and more than a few times, we had Blue Marlin coming into the spread as anglers were fighting Dorado. A little closer in, the Black Marlin started coming through as expected. We released a few each week, with some over 600lb. The odd Black was caught further out, where we would normally target Blue Marlin. The Sailfish bite slowed as we moved away from July, as expected. Sailfish did give anglers some fun in between other bites, and helped a few anglers achieve their coveted Billfish Grand Slams. The Dorado came out in that XXL size range throughout August, and loads of wee little Dorado were found around the flotsam while fishing for bait. The Yellowfin Tuna bite has been either hot or not, which is strange for this time of year – with sizes ranging from 20lb to 200lb. Closer in, we were able to get some excellent inshore action, with Bluefin Trevally, Cubera Snapper, and Roosterfish biting. We even hooked the odd Tarpon, Grouper and Wahoo amongst other species.

The weather has continued on the erratic streak that we have been having this year, and we have felt the effects of the big storms up north, all the way down here in Panama. The water temperature has been hanging around 84F, which is perfect Marlin temperature. The winds have been anything but consistent, and we have seen a lot of rain. The current offshore ran a very nice two to three knots all month, right up to the end when it stalled slightly, which made the fishing a little tougher.

Mike Spezzano was back at Tropic Star, and this time he had his buddy, Paul Montalbano, with him for the adventure. Paul had practically no saltwater experience when he arrived at the lodge. But when he left, well… let’s just say that he now has more than enough stories to last him quite some time. The duo fished with Luis on Miss England, and on their first day out, Paul managed to release his first Black Marlin, two Blue Marlin and a Sailfish – also giving him a Billfish Grand Slam! The next day, Mike got to have some fun releasing a Blue Marlin. Over the course of the week, the guys released Billfish every day, with the exception of their last day. That’s when they went inshore to change it up, and have some fun around the rocky points and beautiful mountains. The guys smashed it again. The gentlemen anglers got stuck into a great Roosterfish bite and released a bunch of other inshore species. Mike and Paul had a trip of a lifetime, and we can’t wait to see them back again.

Flint Besecker was back at the lodge, with his son, Noah. We haven’t seen Noah at the lodge in over three years, so it was great to see him again. The father-son duo always have a fantastic time with us, and we shared a good few laughs together as they shared some memorable fishing stories. On their first day out, they released a Blue Marlin and a Sailfish, and got the best of a giant Dorado. Not too bad for a half day of fishing! As the week went on, the guys added more Billfish to their list of catches, in addition to some exciting inshore species, including a Bluefin Trevally. Unfortunately, Flint’s trusty old pink popper didn’t have as good a time as the guys. Things were off to a promising start when it was devoured, as any angler hopes for…  except it was by a giant Wahoo, who then disappeared with Flint’s popper! I was fortunate enough to spend a day with the guys on Island Star with Gavilan and Manuel, and what a day we had. We got to release two Blue Marlin around the 300 -350lb mark, and they put on a real show! We  released Sailfish and brought in a couple monster Dorado too, to finish the day off strong.

Dana and Patty West were joined by their loved ones for an exceptional family trip. Their son Hugh, his far better half, Allison Catana, and their daughter, Leah came along, as did their good friends Mary and Wayne Underhill. It was great to see everyone back at the lodge, swapping stories and theories after not seeing each other for quite some time. The group caught and released multiple Billfish, both Marlin and Sailfish alike. Alison released her first Sailfish of around 90lb. She walked the plank to the cheers of the entire group. Wayne had a 100 to 150lb Yellowfin that popped the line after an hour and 20 minutes of fighting it. The group also had loads of Dorado scattered throughout the week to add to their score. Inshore, they caught gorgeous Roosterfish, and giant Cubera Snapper of over 70lb. And they even came back with Wahoo! All in all, the West family and friends had a great week and we cannot wait to have the family return next year.

George Couch returned for his 17th trip to the Tropic Star Lodge. He fished with Capt. Walter on Miss Darien, with Ermel as his mate. He was here to catch Marlin, and he brought his arsenal of toys with him, including his favorite lures, to achieve just that. He refers to his lures as cheeseburgers since the Marlin love them so much. And wow did they ever! George and his crew managed to raise and catch some Billfish, and some very nice sized Dorado. George has fished all over the world many times over and knows his way around the deep – but this trip held something very special for George. He released his 6th Billfish Grand Slam. That is a feat not many anglers have ever achieved, and we are proud and honored to share this memory with George, who achieved all 6 of his Grand Slams right here at Tropic Star Lodge.

Josh Spirtis and Kelsey Gray joined us for a very special trip… you see, they got engaged at the lodge! Josh planned the whole affair meticulously, and Kelsey made his night when she shared a resounding  YES. Neptune clearly blessed these love-bird anglers! On day-one, they each released a Blue Marlin and a Sailfish. The couple got to experience a lot of the species that Tropic Star has to offer, as on the rest of their trip, they experienced loads of fun with a great day of inshore fishing. They hooked two Black Marlin, which unfortunately came off, but they had a taste of the adrenaline that will no doubt have them return for more. They made up for the loss with Blue Marlin, Sailfish, and some giant Dorado. It was fantastic having the couple come and enjoy the beach, jungle and fishing here in the Darien, and we can’t wait to see them back as man and wife!

August was an explosive month, in between the slow days, with some incredible catches. There’s way too many to mention them all. We had many guests releasing their first Billfish, either a Blue Marlin, Black Marlin or Sailfish. We had guests coming back to the dock with monstrous Dorado, huge Yellowfin Tuna and a myriad of inshore fish making for some incredible stories around Marlin Bar. We celebrated two engagements, a couple of birthdays and 2 wedding anniversaries. And as always, new friendships were formed. These are the things that make the team here at Tropic Star love what we do. From getting to host the incredible people who come to enjoy their time in the jungle of Panama and creating memories made to last, to giving our guests the opportunity to catch that fish of a lifetime – there really is no place like our home, Tropic Star Lodge.

This website uses cookies to improve your experience while you navigate through the website. Out of these, the cookies that are categorized as necessary are stored on your browser as they are essential for the working of basic functionalities of the website. We also use third-party cookies that help us analyze and understand how you use this website. These cookies will be stored in your browser only with your consent. You also have the option to opt-out of these cookies. But opting out of some of these cookies may affect your browsing experience.
Necessary Always Enabled

Performance cookies are used to understand and analyze the key performance indexes of the website which helps in delivering a better user experience for the visitors.

Analytical cookies are used to understand how visitors interact with the website. These cookies help provide information on metrics the number of visitors, bounce rate, traffic source, etc.

Advertisement cookies are used to provide visitors with relevant ads and marketing campaigns. These cookies track visitors across websites and collect information to provide customized ads.

Other uncategorized cookies are those that are being analyzed and have not been classified into a category as yet.

Book now for March – September 2022, and you will receive 10% off as part of our Early bird offer!